The cheapest new GLE is not cheap. The build quality is just as good as in the 450. The ride is super comfortable. The only thing missing is the swooshing feeling of power on high revs.

1 – Try before you buy. You might get a wake-up-call. The smallest diesel engine is not very impressive on paper. 245 PS and 500 Nm. 0-100 km/h in 7 seconds. Pretty ordinary. But somehow you still manage to beat other motorists at the green light.

When you learn to drive the thing (taking it easy, letting the power build up before you accelerate or overtake) the ride is simply rewarding. The soft air suspension is much better than in the old GLE, almost on par with the old GLS. The suspension soaks up bumps like nothing else I’ve driven before. Combine that with a somewhat slow engine and you are in for a ride that will put you to sleep.

However, the sleep is more spa-like than why-is-even-that-tiny-car-leaving-me-behind-at-the-green-light tired. This car may lack the top performance figures in the 450 but thanks to the fast and smooth shifting gear box you’d be surprised to see anything than open road in front of you.

2 – Larger than ever but the exterior design will fool you into thinking the opposite.

Park the new GLE next to the old GLS and the latter is only a few centimeters bigger. That is not very obvious when you see the GLE on its own.

From certain angles the new GLE looks like a meatball dipped in white powder of your choice. Especially when you stand at an angle in front of it and the D-pillar is hidden from view. Then the car looks very strange.

But if you raise the air suspension and park the GLE next to something like an old BMW 3-Series the difference in size is striking.

When I drove the last generation GLE back in April 2016 one of the things that did not impress me was the lack of luxury level second row leg space.

It was not bad but it was not good either. During my review week with the old GLE 400 (Coupé) we had the front facing and rear facing child seats mounted. The space between those two was more towards cramped than comfortable.

Not much so in the new GLE, where I could stand with both feet on the floor between the driver´s seat and the second seats when fastening the seat belt over my daughter. Impressive to say the least, considering I am 190 centimeters tall and weigh in at 100 kg.

4 – Decent fuel economy on the highway, not so much around town. But then, this is a large vehicle. What to expect?

Consider this: Diesel through four cylinders, power generated to the 4MATIC system through a 9-speed automatic transmission, in a spacious and comfortable large crossover than comes almost fully equipped with all the latest driver´s assistance and safety features.

Paying for 8 liters/100 km should be considered more than decent. But at the same time: We live in an era with anything but a 48V system and range in the high 30s (miles per gallon) is almost dinosaur like.

Word of notion: My tester was almost brand new with some 350 km on the clock. Maybe it was not broken in yet, maybe the consumption during my review week driving with plenty of starts and stops (with auto start and stop turned off) does not resemble real world ownership. Owners will tell.

5 – Final verdict: The new GLE is a huge improvement over the outgoing re-badged ML-Class. The drive train even with the smallest engine is probably enough if you fancy mostly highway driving and never or rarely pull heavy things.

I had the chance to take the GLE 450 EQ Boost for a spin and I immediately noticed a heavier feel over the front axle. Not sure if it actually is heavier. It just felt like it.

Also; driving a petrol powered V6 is something different than relying on a four-cylinder diesel engine. The low end torque is not there. On the other hand: When you put your foot down this thing moves and at the redline the exhaust sound is more than decent. I wonder how the GLE 63 S will sound like?

Comfort is very good. Interior space is also very good. Looks is good when you lower the suspension and park in next to a grass field 30 minutes after sunset.

If you can’t afford the larger GLS and do not want the old GLS, the new GLE is probably a good buy. Especially since it will probably be ages before Mercedes put out a new generation of the GLE.

If you can stomach the rather hefty price tag for the GLE with some much-needed options I would say that this is probably one of the best large crossovers money can buy. It’s hard to imagine things on this car that can be improved. 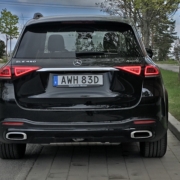 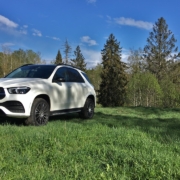 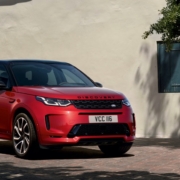 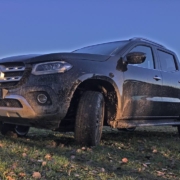 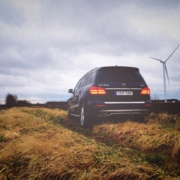